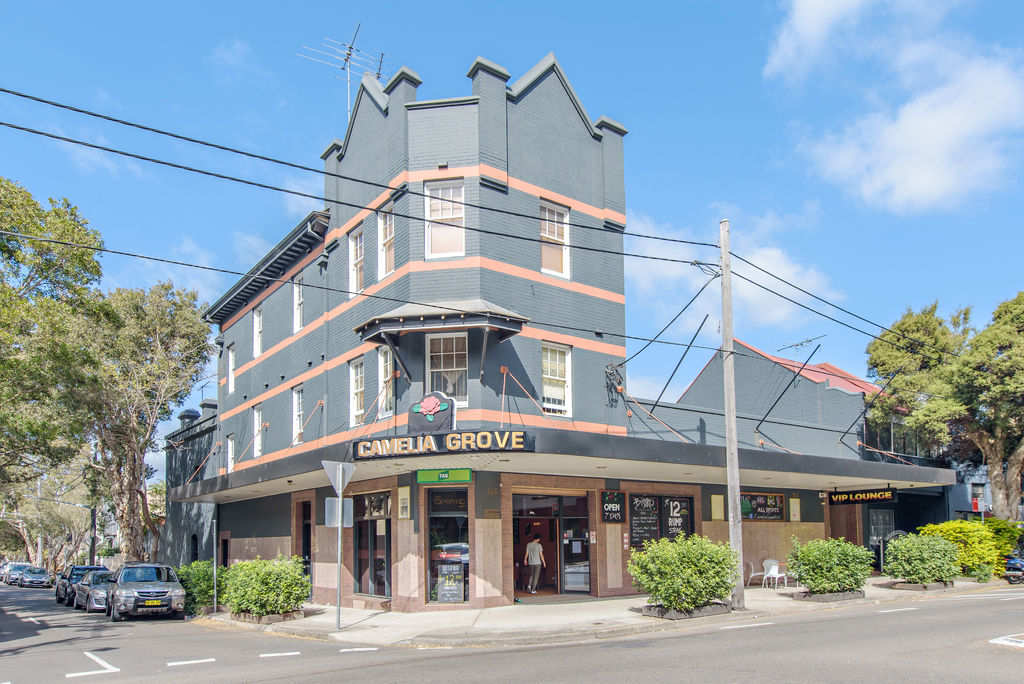 Local Sydney developers have acquired Alexandria’s Camelia Grove Hotel in a sign that the Sydney pub’s market shows no sign of receding in the New Year.

HTL Property’s Blake Edwards and Sam Handy exclusively negotiated the transaction on behalf of industry legend Adella Wright-Young; who has owned and operated the hotel for some 38 years.

The hotel was sold to local developer Jaga Group who own several similar hybrid pub and accommodation developments across Sydney. The sale marks HTL Property’s third freehold pub transaction to mixed use developers in as many months, after the recent Engadine Tavern and Narwee Hotel announcements.

“The combination of a shortage of prime opportunities in the Sydney market, and a site like this with such raw potential, was always expected to attract huge interest from a wide variety of buyer profiles” advised HTL Property Director, Blake Edwards.

The impressive hotel is prominently positioned just metres from Australia Technology Park, which currently caters for CBA’s 10,000 employees along with a shopping centre, child care centre, gym and some 700 car parks. The catchment will be bolstered by further growth over the medium term via numerous urban renewal projects within the South Eveleigh corridor, and nearby Waterloo Metro Quarter.

Mrs Wright-Young purchased the hotel in 1983 from Tooth and Co, and has mixed emotions about the sale.

“After so many years it is bittersweet to be selling the hotel which has been not only my business but my home for so very long. The patrons and local community become close family and friends” advised Mrs Wright-Young.

“But I still work most days, so the sale will give me some free time to do other things; most notably spend more time with my family” Wright-Young concluded.

The hotel is situated on a 750sqm site, and offers future mixed-use development potential underpinned by its existing B4 Mixed-use zoning,18 metre height approval and 3:1 FSR.

“HTL Property anticipate the Sydney Metropolitan  midmarket to be a very active sub-segment this year, and have commensurately increased our focus and resources in order to deliver these kinds of outcomes to our valued clients” added HTL Property Director, Sam Handy.