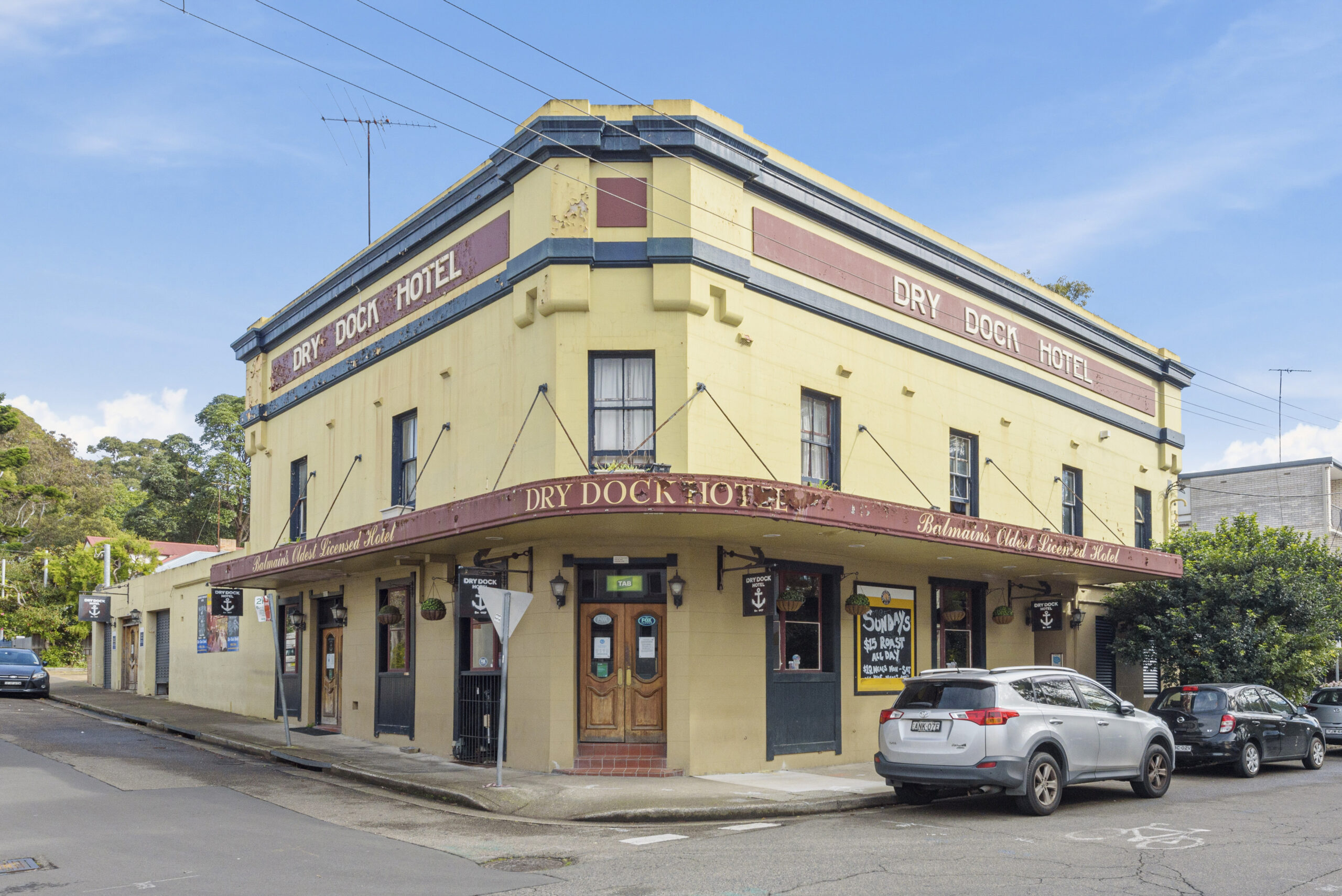 HTL Property is delighted to advise the market of the sale of The Dry Dock Hotel in Balmain to new entrant to the hospitality industry, Peninsula Hospitality Group.

The newly formed group, spearheaded by experienced operator James Ingram, has partnered with an investor group of seasoned investment professionals which includes current and former residents of Balmain who know the area well.

Ingram enjoys an outstanding hospitality pedigree, having worked in the industry for 25+ years across some of Sydney’s leading organizations; and has separately collaborated on many large-scale hospitality projects including with groups such as Merivale, Solotel and Hawkes Brewing Co.

The Dry Dock Hotel is recognised as one of Balmain’s oldest pubs, established in 1857; and nestled in the backstreets of the Harbour side suburb adjacent Mort Bay Park, and close to the Balmain Ferry terminal.

The hotel was listed for sale in mid-August and transacted working a week of the campaign closing. The Dry Dock Hotel was sold by Blake Edwards and Sam Handy from HTL Property, in conjunction with Peter Seeto from Cabmon Property.

The hotel itself is in need of a renovation and refurbishment, and as such was being marketed as being a ‘veritable blank canvass’ for an experienced restaurateur or food and beverage focused hotelier.

The successful Purchaser, Peninsula Hospitality Group, intend to execute a capital expenditure program across the entire hotel; and reposition the offering with a new food and beverage concept – one that will better resonate with the locals of Balmain and Birchgrove.

“Our attraction to the Dry Dock was that it has a large 645sqm footprint, a logical layout and is possibly the last real opportunity to acquire and renovate a venue of scale in Balmain” offered Purchaser James Ingram.

“I’m excited about what we can deliver to the local peninsula community as I believe there is room for a very strong food and pub offering in this dynamic precinct” Ingram added.

“Our plan is to operate the pub in its current form for an initial period while we plan for some much-needed reinvigoration. Our aim is to retain the Dry Dock’s character but with a refreshed vision to deliver a high-quality hospitality experience” concluded Ingram.

Importantly, the transaction represents another Sydney pub to be both listed and sold during the second round of CV-19 closures, which is indicative of the industry’s resilience and investor magnetism.

‘We did, initially, give some consideration as to whether or not we should postpone the sale campaign until such time as the hotel was reopened for trading,” suggested HTL Property Director, Sam Handy.

“However, the sale of the hotel demonstrates that whilst trade has been interrupted yet again by the CV-19 restrictions, demand for high quality pub assets has not softened whatsoever,” he added.

The HTL Property sale campaign yielded six Offers to Purchase and attracted intense interest from a broad range of buyers including hoteliers, restaurateurs and developers.

“I was slightly apprehensive around selling the hotel during the CV-19 closures and restrictions, but the boys were confident in achieving my desired outcome, and to their credit they delivered upon my expectations which is what they said they would do; and I’m delighted with the result” commented Vendor, Michael Patterson.

“This successful sale, like so many others in the past 3 months, is emblematic of the market depth which we say will serve as the springboard from which the industry will launch across a national transaction footprint in concert with restrictions relaxing” commented HTL Property National Pubs Director, Dan Dragicevich.